A remembrance of  the apocalypse. Until it comes again… 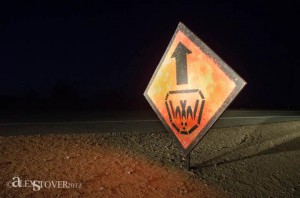 (Some of you  may want to skip reading this recap and just watch the short highlight video from 2012, it does a great job of encapsulating the whole event!)

Wasteland 2012 was our third year of throwing The Party At The End Of The World™. Once again, the event was a huge success and we nearly doubled our attendance over the previous year (Over 1,000 people attended).

First and foremost, we must thank our dedicated (sometimes heroic) crew of volunteers (and volunteer performers). This event is built and sustained by those who create, sweat, and bleed just for the love of maintaining this incredible fictional world for all of us to enjoy a few days a year.

With each event, everyone involved with Wasteland strives to make it bigger and better than the year before. 2012 was no exception. We had many new and improved things to debut for the attendees, from larger, rebuilt guard towers on the sides of the Wasteland Gates, to an all new (shaded!) command center and “info tire”, to a completely new Atomic Café, a new stage (more on that later) and all new attractions like the Wasteland Film Festival.

The tribes from previous years came back in force, and turned everything up a notch. The ever-popular Last Chance Casino was back, and it was bigger and busier than ever. The Wasteland Communications Corps had an incredible camp and a giant radio mast that could literally send and receive around the world. The Dome Of Destruction crew added fire dancing and fire combat to their shows this year. Mr. Death and Jack Dagger were back, this time with a performance area for some whip demonstrations and blade throwing (now with audience participation!). Several tribes even came together to create “super tribes” or “nations” such as Apoc Nation and the huge encampment from Arizona. Even our first-time tribes brought it big, like the large, well-presented Lost Vegas tribe. And not all of the great stuff was confined within the compound’s walls; outside in the general camping area were groups like Legio X, the AHTCK Sqad, and one of my personal favorites – Captain Walker’s Scrounge Lounge. I know I’m leaving some great camps off of this list (like the Mutant Hunters et al.) but you guys all did an incredible job and really created an immersive post-apocalyptic community. 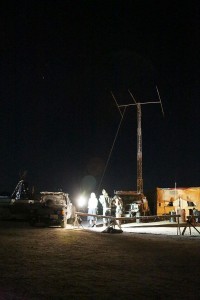 Now, as one of the event co-founders and the entertainment director, I stay pretty busy all weekend trying to keep things running, and there are definitely some things I missed (especially the stuff that went on inside the themed camps and outside the walls) but here is a brief rundown of some of the highlights of Wasteland 2012.
(It’s very possible that my memory is a little faulty on this, given that the whole weekend ends up as kind of a blur for me, so feel free to email me additions and corrections. I’m at jared at wastelend weekend dot com.)

Volunteers and staff arrived days ahead of time to start setup, but the first “official” day of the event was Wednesday, when tribes, volunteers and vendors were allowed to join the volunteers in setting up early. 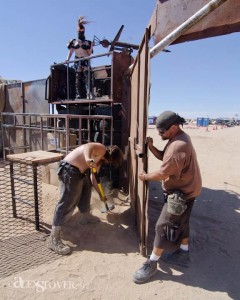 By Thursday, the general attendees started rolling in, greeted by our staff at the check-in gate (with a nice in-theme  burning car wreck to tell them where to stop – thanks to Phoenix Auto for that). Around midday Thursday, we sent some of our dancers to the front of the Wasteland gates to draw a crowd (mostly the Nuclear Bombshells, I think) and prepared to open the gates.

Vehicles revved their engines, wastelanders gathered their weapons… and the gates opened. 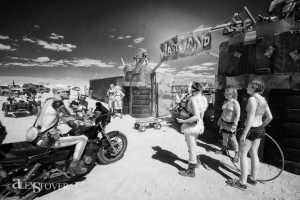 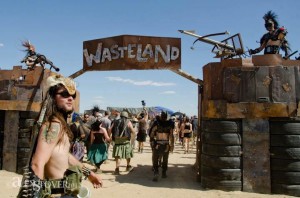 It was really cool to see a crowd of people and vehicles pour through the gates, to be greeted by our Elite Guard (with an even larger contingent of guards this year). Inside, the Casino was already barking to the suckers – I mean, customers, our Wasteland tour guides (new this year) were offering their services, the Dome fighters were practicing, the all-new Wasteland Body Shop was providing free body paint, mohawks and donated wardrobe pieces, and the vendors were hawking their wares. Incidentally, we had a great group of new and returning vendors this year. Not only did they have some really cool one-of-a-kind post-apocalyptic-themed merchandise available, but their tents, shops, and stalls really added a lot to the event atmosphere.

At nightfall, we opened the new Atomic Café for business, and we brought some fire performers and our Elite Guard over to the main stage to kick off the evening’s entertainment. Our DJs provided some music and we had fire performers as well. 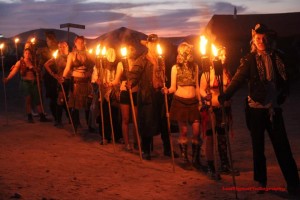 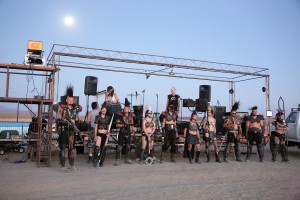 This year, more than in the past, we wanted to have simultaneous entertainment at the event. Each night, the Dome had fire performers as well as staged combat, the Casino was running, the Film Festival (next to the command center) was showing movies, and Dystopia provided music and a place to dance. Dystopia was envisioned as an alternative music venue in addition to the main stage; a place for people who wanted to dance and preferred more electronic music. 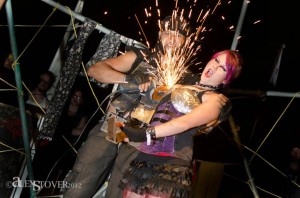 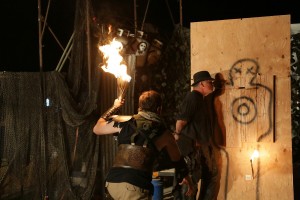 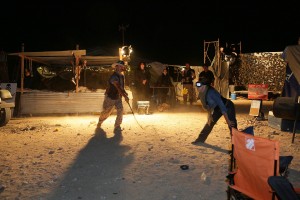 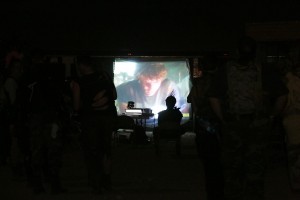 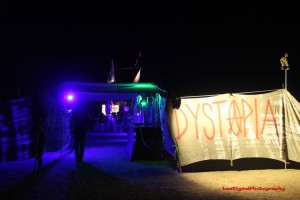 On Friday, it was a bit warmer but it was pretty clear that, while definitely hot, the event was not going to have to deal with the nasty heat wave that we had last year. It seemed that pushing the event one week later had resulted in nearly perfect conditions; hot during the day, but not too cold at night, and most importantly, none of the very high winds that had plagued us in the past. We hope to be as fortunate in 2013.

Smash Botz set up an amazing camp outside the compound next to the walls of the old water cistern. The put on a robot battle Friday at sunset that was incredible. And if you missed it, you weren’t the only one, it was packed pretty tight around there and hard to see – standing room only! We may have to figure out some stadium seating for those guys next year, it was that popular.

Right after sunset, we had a bunch of cars roll in from the Wasteland near the stage for a special intro for one of our favorite returning Wastelanders – Lord Humungus. 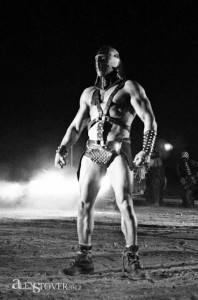 Friday night, Talea took the stage as our first live band. They did a great performance despite having to deal with some technical issues that were not their fault. 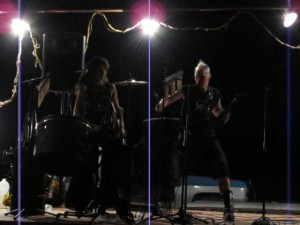 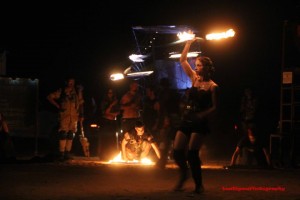 Saturday was a big day. We had archery and the wasteland games in the morning, followed by an EPIC midday car cruise in the desert outside the compound, another jugger match in the afternoon, a group photo at sunset, and the costume contest. I have to say that judging the costume contest is one of the hardest things I have the privilege of doing at Wasteland. The sheer number of INCREDIBLE costumes that show up year after year is just amazing. Trying to pick favorites out of that group is very difficult. 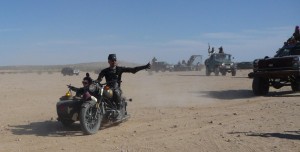 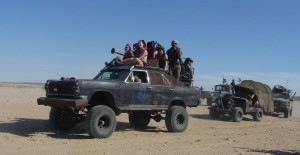 Finally, when the day’s activities were over… we presented a ton of live music on Saturday evening. (Some technical issues at the main stage had delayed things, so some of our Friday night bands ended up playing Saturday)

We had All Hail The Crimson King who kicked our night off with a great set (including a marriage proposal – lead singer Tim now has an Elite Guard for a wife), followed by Larva, Quiverbone, Mouth Of The Serpent, and a special surprise performance by AMF – Aesthetic Meat Front, making a triumphant return after performing at the first Wasteland in 2010. Anyone who witnessed, or participated in AMF’s Saturday night ritual won’t soon forget it.
(for more info on the bands that played Wasteland, click HERE).
And incidentally, I can tell you that we are already building an all-new, much improved stage setup for Wasteland 2013. Any technical issues we had this year should not be a problem going forward.

In addition to the music, we had more great fire performing, including an extended performance by Duel At Dusk Productions and the Nuclear Bombshells of Lost Vegas. (And thanks to our gogo dancers who finally had a chance to perform once we got the music going.) 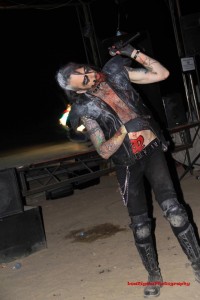 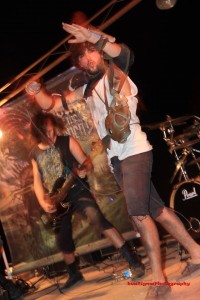 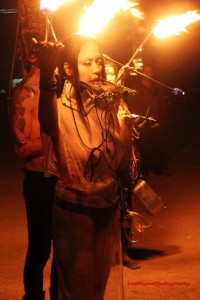 On Sunday morning, our venerable Wasteland Preacher known as Brother Justify delivered another sermon (his third year in a row) despite his ongoing deterioration from radiation sickness.

All in all, it was an amazing weekend. And despite some of our technical issues (that WILL be solved for next year) everyone managed to have a great time. We’re very happy with some of the new additions to the event, as well as all of the new people we’ve been able to welcome into the Wasteland family. Things are looking very exciting for 2013.

Note: This was not meant to be a photo essay of the event. I threw a few random photos in here just to keep readers from getting bored. We are working on putting together a photo gallery for our site that is much more comprehensive.